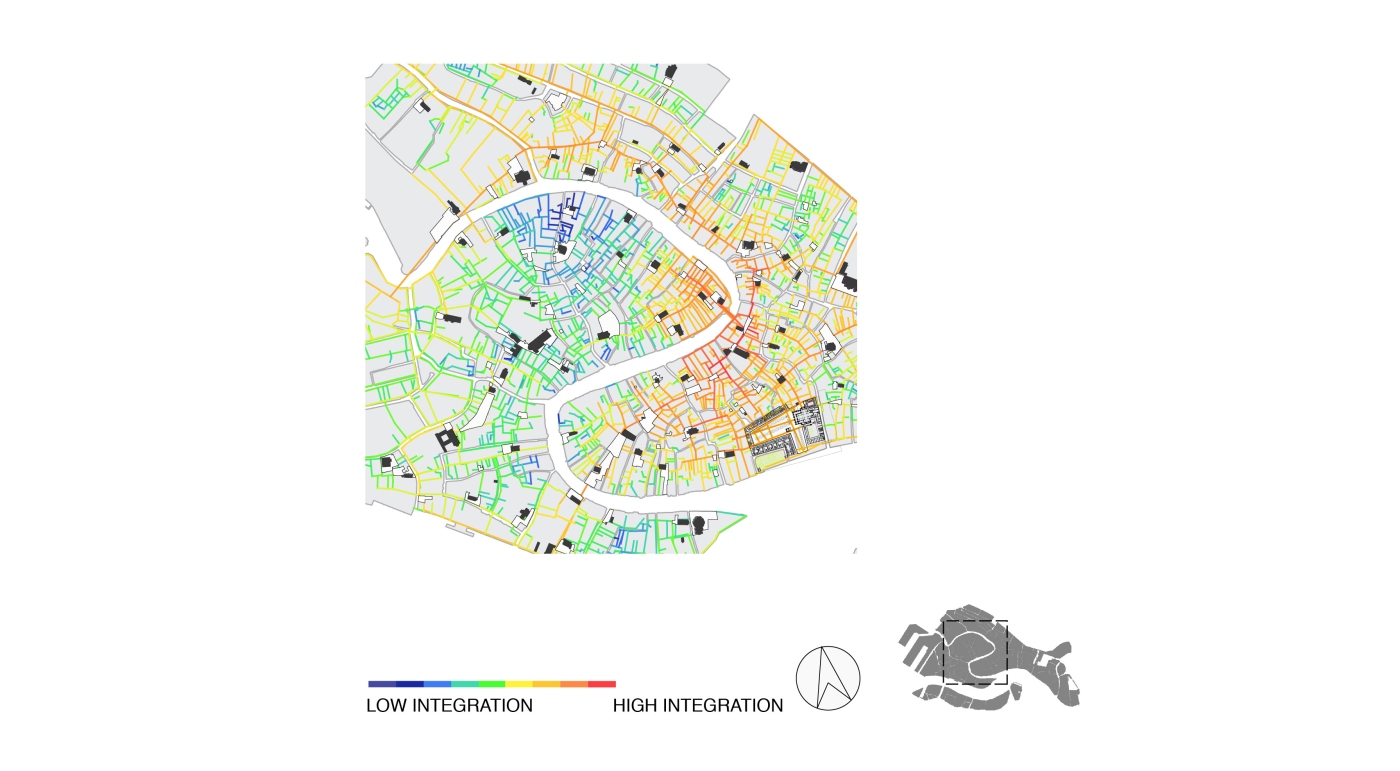 ‘However abstract, however contemplative in spirit, however remote from practical application, it [geometry] must surely have arisen from, and easily translates back into, the tasks of shaping artifacts, laying out buildings, and surveying land’.

Robin Evans, The Projective Cast: Architecture and its Three Geometries.

In a visually oriented culture we tend to equate what we see in drawings, photographs and maps, which are subjected to the geometry of vision, with how a place looks when we experience it directly and dynamically on the ground. We have to transport ourselves to the turn of the sixteenth century in order to understand how images like Jacopo de’ Barbari’s aerial view of Venice must have looked to Venetians. Presenting the urban landscape of the floating city as a viewer would have seen it above the bell tower of San Giorgio Maggiore, Jacopo’s map was the most detailed representation of Venice from a view-point that was previously unimaginable.

Jacopo’s print was part of the tradition of Mappae Mundi (medieval world maps) produced in the sixteenth century by Venetian cartographers. Two diagonal lines established by the wind rays emanating from the gods that circle the city impose a geometrical coherence on the print, intersecting at the top of the Campanile in the Piazza San Marco. The diagonal and vertical axes establish an axis mundi (a world pillar) locating the Piazza, the Rialto and the commercial streets that connect these two hubs (the Merceria) at the ‘centre’ of the city, and the city at the centre of an ideal cosmology.

In a previous blog entry I suggested that the map expresses Venice’s identity as the perfect combination of urban landscape and political institutions. Here I ask: how does this symbolic identity relate to the spatial geography of the city? This leads us to the more general question about the interplay between the vision of the city represented in the map, a drawing or a photograph, and the city itself as we encounter it in everyday life.

A look at the pedestrian network of Venice using the measure of ‘betweenness centrality’, which accounts for the shortest paths that link all pairs of origins and destinations in a network, shows that the Piazza and the Piazzetta are criss-crossed with routes of high values (shown in warm colours), connecting them with the squares of the neighbouring islands. Two strong lines (in terms of values), one traveling through the Merceria, and the other through the Calle dei Specchieri connect the Piazza complex, through the campi of San Salvador and San Lio with the commercial district of Rialto.

The analysis of the combined pedestrian-water structure shows a similar pattern, although in the case of this network emphasis in terms of the values of betweenness centrality shifts from the pedestrian elements to the canal infrastructure. 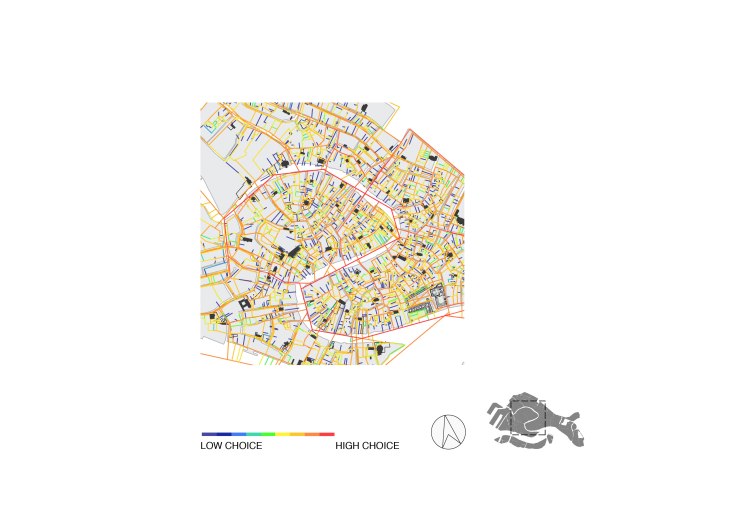 We can also look at the structure of Venice’s urban networks using another measure: closeness centrality, or ‘integration’, a measure that captures the ‘distance’ of every element to every other element in the urban network in terms of angular turns.1 The distribution of this measure shows that the Rialto, the Piazza and a group of streets connecting these two hubs define a deformed wheel that links the heart of the city with its periphery extending in opposite directions. This is a common characteristic in cities, easing movement from the outside to the central streets and squares, facilitating trade and large-scale communication.2 While betweeness centrality expresses the through- movement potential of a street, closeness centrality, describes the to- movement potential of an element as a destination, or the ease of getting from one element to all others.3 The figure below shows a dense cluster of integrated streets connecting the Rialto with San Marco, reflecting their strong position as destinations in the urban fabric. More importantly, the figure highlights the link uniting commercial interests (expressed by the Rialto as a commercial centre) and state governance (the Piazza San Marco and the Piazzetta) through the twin centres and the Patrician class, who were both merchants and council members of the Venetian Republic. The two measures – betweenness centrality and closeness centrality – express another duality of forces: the collective power of parish communities in forming the city, and the civic community as a whole exerting primacy over and above the parochial centres.

The analysis of Venice’s urban structure captures the properties of the city in terms of how spatial elements link with all other elements and the strength they hold in the network as a whole. It thus provides a model of how pedestrians or waterborne travellers negotiate the urban structure of Venice when moving inside it. This analysis also captures the social and political structure of Venice at the time in which Jacopo’s map was produced, giving an indication that spatial properties of cities (and buildings) are not purely physical, but encapsulate their social and political fabric.

As opposed to these of mappings the spatial geography of Venice, the map of de’ Barbari is a pictorial representation. It helps to understand a range of properties not apprehended by this analysis, such as the three dimensional appearance of buildings and public spaces, including the representational expression of Venice as the serene metropolis resting at the centre of the lagoon.

Yet, imposing artificial coherence on the irregular fabric of the city and its surrounding environment, Jacopo transposed network centrality to geometric centrality through the ‘axis mundi’. It thus externalised the urban structure of the city and make it synchronically available to the eye as a ‘world pilar’. By subjecting Venice into the strategies of composition and projection by which world maps (mappae mundi), and even buildings, were constituted, Jacopo translated the city and its lived structure into a visual object. His map is an example of the archaeology of ideas about things and their representation. It enables us to understand why images and the world are so often confused for one another, and assessed as being the same.

The effort of making the world match its representation mixes the ideal with the real, that which is visually accessible and synchronically available to the eye with that which is empirically understood through movement. De’ Barbari’s map is not an image that reflects the city’s urban unity but one that supplements the lack of a single point of view from which they city can reveal its absent coherence.

In the next blog entry I will examine how architects have interpreted the spatial structure of Venice by looking at Sansovino’s renovation of the Piazza San Marco and Palladio’s churches in Venice’s southern islands in the 16th century.

2. Hillier and Hanson, The Social Logic of Space.